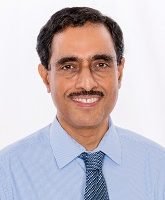 Dr Krishnamoorthy Niduvaje studied medicine at Calicut Medical College in India and graduated in 1983. His early training in Paediatrics began in 1985 at the same institution from where he obtained his Diploma in Child Health degree in 1987 and M.D (Paediatrics) degree in 1988. In 1994, he migrated to the Sultanate of Oman where he worked as a specialist in Paediatrics under the Ministry of Health. He became a Member of the Royal College of Physicians in UK in 1997. During his stay in Oman, he was actively involved in the management of children with sickle cell disease and G6PD deficiency.

He came to Singapore in 2000 and has been working in the Department of Neonatology in National University Hospital since then. He underwent advanced specialist training in Paediatrics from 2004-2007 at the National University of Singapore. He is a Fellow of Academy of Medicine, Singapore since 2007.

His areas of interest include bedside ultrasound examination in newborn, outcome in very low-birth-weight infants and brain cooling in asphyxiated newborns.