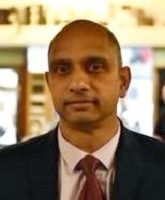 Dr. Thurairajah graduated from Kasturba Medical College in India in 1997. He subsequently pursued training in Internal Medicine in the United Kingdom which culminated with membership to the Royal College of Physicians (MRCP) in 2002. He trained in Gastroenterology and Hepatology at the West Midlands Deanery, Birmingham, UK and completed two fellowship stints, his first in Transplant Hepatology at the Liver Unit at Queen Elizabeth Hospital in Birmingham and his second in Hepatobiliary endoscopy (ERCP and EUS) at the University College of London (UCL) before obtained his Completion of Certificate in Specialist Training (CCST) in 2011. He completed a period of research leading to a Doctorate in Philosophy (PhD) in the field of Hepatitis C in 2010. He is well published in peer reviewed journals and continues to engage in clinical research.

He worked as a Consultant Transplant Hepatologist at St. James University Hospital, Leeds, UK in 2012 before moving to the Liver Transplant Unit at the University of Kentucky, USA as an Assistant Professor in Medicine where he served for 2 years. He moved to Singapore in 2014 and worked at Changi General Hospital , where he set up a treatment programme for Chronic Hepatitis C and served as the Director of Hepatology.