Prof Biswas obtained his basic MBBS degree from Calcutta University, India where he was awarded the Gold Medal in aggregate as well as in Obstetrics & Gynaecology and Pathology. He started his postgraduate training in Obstetrics & Gynaecology at All India Institute of Medical Sciences (AIIMS), India in 1981 and continued further advanced specialist training in UK from 1987.
Prof Biswas obtained his MD in 1986 and MRCOG (UK) in 1989. He obtained the FAMS in 1999 and became a Fellow of the Royal College in UK (FRCOG) in 2001. His current practice at NUH includes all areas of general Obstetrics & Gynaecology, heading the Maternal-Fetal Medicine division of the department. His current practice at NUH covers all areas of general Obstetrics & Gynaecology and his special interest includes prenatal diagnosis, antenatal ultrasound and high-risk pregnancies. He is currently also the Clinical Director of the department. 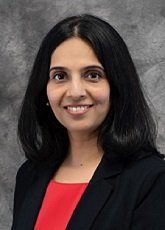